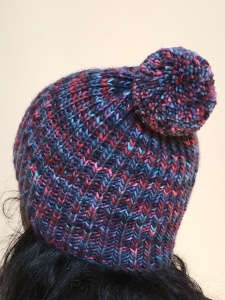 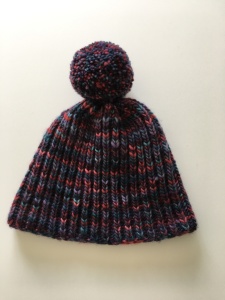 Yarn Used: Manos Del Uruguay Maxima* in Mixed Berries colorway.
Project details: The hat was knit in the round using the Fisherman’s rib stitch pattern. This project requires some concentration and focus and is certainly not a project to knit while watching TV. It’s best to put lifelines (there’s a short tutorial on lifelines for brioche stitch by Fruity Knitting Podcast Episode 35) every now and then because fixing a mistake in this stitch pattern is quite frustrating and time-consuming. More project detail can be found on my Ravelry project page.

The versatile craft of knitting
The versatile craft of knitting can teach us many things besides the various stitch patterns and techniques. It can be therapeutic, reduce stress, and also sometimes teach us to be more mindful, kind, thankful and calm. And now, according to the article “Girls Knit Their Way to a Math Career“, knitting is being used to teach kids math and science concepts and also to ease their math learning anxiety.

In the past year or so my focus has been more on reducing my yarn stash and less on the benefits of knitting that initially drew me to this craft (read the reformatted entries of my previous blog named Coffee Tea or Knits). While too much yarn and too many WIP’s can be overwhelming and stressful, it’s heartening to know that knitting can teach us many positive things that are just as versatile as the craft.

*There’s an article in the Spring 2017 issue of Interweave Knits about Manos del Uruguay, a non-profit cooperative organization, and its social mission for the rural women in this country.

Hello and welcome to Coffee Tea Knits. Knitting became a hobby back in 2010 and since then I have learnt and still continue to learn more about this craft. Come join me as we explore the wonderful and versatile craft of knitting and topics related to it by reading knitting tidbits and seeing some of my knits.
Ravelry name: coffeeteaknits